Spring is in the air, the days are growing warmer and life at the shore renews. Nothing compares to a walk along the boardwalk at the Jersey Shore on a warm spring day. Jersey has some of the most beautiful beaches spanning 127 miles from Sandy Hook to Cape May, with quaint downtowns filled with little shops and cafes.

Hargrove's love for the sea began as a child growing up in Sicily. From the amazing sandy beach of Mondello all the way to Castellammare del Golfo and San Vito Lo Capo. His love for the saline Lagoons in Trapani and his hometown of Marsala is reflected in his painting, Sale Del Mare (Salt of the Sea.)

After arriving in America, Hargrove eventually settled in a small town on the Jersey Shore. The coast of New Jersey, although very different from the beaches in Italy is amazing and ever-changing. There is nothing like early dawn on a crisp spring day, the sound of the waves splashing on the shoreline and the sky so clear and bluish that it sees like the horizon never ends. It's invigorating and calming at the same time.

Then in that respect is the Jersey boardwalk. Some of Hargrove's favorites are of course Point Pleasant Beach, where his Fine Art Showroom is located. In the summertime, the boardwalk is alive with music, arcades, swirling carousels, restaurants, an aquarium and boast some of the best antique shopping.

A newly found place at the shore for Hargrove is also looked at as one of the most beautiful shore towns, Spring Lake. The artist loves its tranquil ambiance. A quaint town with a two mile long beach, beautiful Victorian houses on tree lined streets and a magnificent church at the heart of the town, Saint Catharine's, which became the inspiration for a series of his latest paintings.

The magnificent Church was founded by Martin Maloney. Martin, his wife Margaret and three daughters spent summers in Spring Lake in the early 1890"s. They were both devout Catholics. When they lost their daughter Catharine to TB, he built the church as a memorial to his beloved daughter. He proceeded to commission works of art for the church for the succeeding 27 years.

Italy has tremendous pride in their beautiful churches. Rome alone has over 900 churches and each one tells a story of the past. The most famous church in Italy is St. Peter's Basilica. Home of the Pope, it is the largest church in the world.

Hargrove's admiration for St. Catharine's in no exception. It tells a story too, of love and devotion from a father to daughter. And a most magnificent tribute.

Although St. Catharines is the focal piece to Hargrove's new "By The Sea" collection, the beautiful shoreline can be enjoyed in "Spring Lake Beach" and "Coastal Seagulls" as well and for those buffs of the majestic lighthouses, the defenders of a bygone era there is "Old Barney" (Barnegat Lighthouse.) 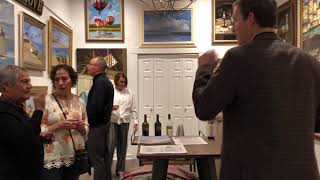 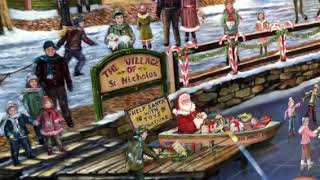 A visit to my Studio